We're open 24/7 and ready to help you during COVID-19 with Sanitization Solutions.

Published by Jennifer on May 22, 2018 in category: Water Damage Restoration 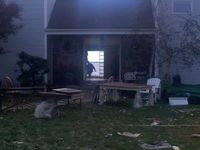 A huge shelf cloud rolled through the city, which acted as a warning for residents to go inside and stay out of the path of the storm.

The strong winds caused by the thunderstorm ripped through the city at around 66 mph, causing damage to homes and businesses and creating a dangerous environment for anyone caught outside.

Trees were uprooted and power lines were downed due to the intense winds, which lead to power outages all over New York. There were more than 3,000 properties in Long Island alone left without electricity.

The National Weather Service deemed the storm as being “extremely dangerous” and urged everyone to stay inside until it has passed.

When wind gusts reach speeds over 60 mph, it is important to heed the warnings of officials and find a sturdy structure to wait out the storm in. Storms like this can cause widespread damage due to the wind blowing trees and other debris into homes, buildings, and cars.

If you are caught outside when these strong winds begin, you need to take cover immediately. Not only do they have the ability to knock you over, but you can be hit or crushed by falling branches and other objects.

Once you are inside of a property, the best place for you to be is inside of an interior room on the lowest level of the home or building. This is the space that will feel the least impact of the wind.

You are going to want to stay away from doors and windows, since winds of this speed can tear off doors and break glass, exposing you to the elements of the storm. To be safe, you can install storm shutters to prevent this risk. They act as a solid barrier between the storm and the glass.

Be Prepared For The Dangers Associated With Thunderstorms

Thunderstorms create a lot more than just loud noises. They create flooding, hail, and tornadoes that can destroy homes and even cause fatalities if you do not take shelter when they hit.

If there is thunder, then there is also lightning, which can be an extremely dangerous aspect of the storm. Lightning kills more people every year than tornadoes, making it a phenomenon that needs to be taken very seriously.

Since thunderstorms cause flooding and rain, it is important to stay out of this wet weather once the lightning begins. Water is a conductor of electricity, so keeping out of it is one of the best ways to avoid being struck.

Lightning can also travel through electronics, so you need to stay off your landline phone and turn off other electronic devices, such as the radio and tv reception systems. It is safe, however, to use your cell phone during a lightning.

Even though lightning strikes are rare, they are a real risk that can be fatal when they do occur. Be smart and stay indoors during a thunderstorm to avoid getting hurt.